Giving Back at Christmas

Have you ever heard of the Christmas-time charity called Santa’s Hidden Kids?

A wonderful organization celebrating its 28th anniversary this year, Santa’s Hidden Kids found its start after John Free visited his mother-in-law in the hospital one Christmas Eve 28 years ago. That night he realized how many children, young and old alike, who worry about being away from their homes on Christmas Eve. Would Santa be able to find them in their unexpected lodgings or would he fly over unaware and forget to fill their stocking? John and his wife, Karna Jo, decided to make sure Santa would find those “hidden” at the unfamiliar stop.

Thus Santa’s Hidden Kids began. Santa’s newest helpers strive to bring a special Christmas surprise to “displaced” children of all ages from 1 minute to 99 years old. Santa and Mrs. Claus visit hospitals and battered shelters on Christmas Eve while making an early delivery to nursing homes and assisted living facilities the weekend before. John, with his long white beard and sparkling kind eyes, makes a holly jolly Santa Claus as he delivers toys, flowers, and hugs to all the good boys and girls on his list – though he is a few cookies shy of being as plump as his classically round counterpart.

So who are Santa’s elves who help fill his sleigh with treasures to share? I’m sure you’ve guessed that part. Thanks to John’s connections with the many contractors and construction companies around Pierce County, companies like Fence Specialists are more than happy to do a little extra holiday shopping and donate toys and treats to such a special cause. What’s in it for us you may ask? A placard with pictures of a few of the many smiling faces Santa’s visits inspire on his Christmas rides.

If you’re looking for a way to bring a little Christmas cheer into a child’s life on Christmas, try looking into charities like Santa’s Hidden Kids. It’s such a wonderful way to bring that extra bit of magic to Christmas – in both your lives and theirs. Merry Christmas everyone! 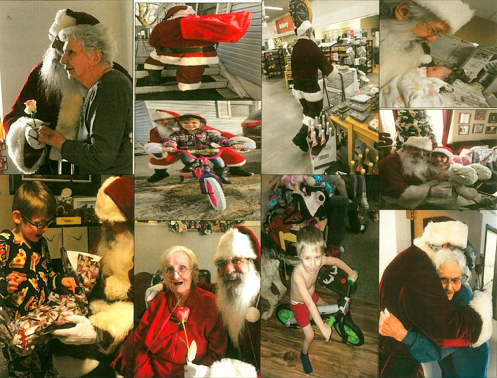 Pursuant to Governor Inslee’s Proclamation 20-25, our business is required to establish, implement, and enforce social distancing policies, consistent with best practices and guidelines from the CDC.